Jack & Jack making a splash on their way to Tokyo 2020 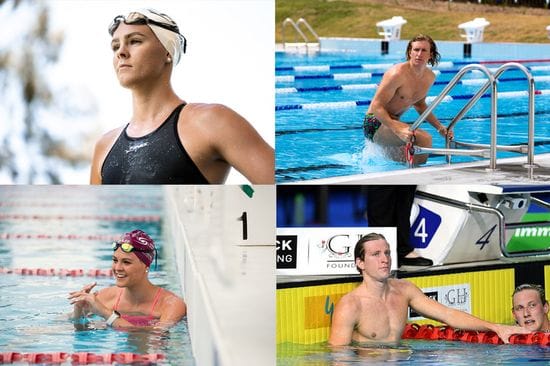 It's a tale of two elite Australian swimmers competing in blue riband events; one a speed specialist in the 50 and 100 metre, the other an endurance champion in the 1500 metre distance event.
Fresh from their gold medal winning performances at the 2018 Gold Coast Commonwealth Games, Brisbane-based swimmers Shayna Jack and Jack McLoughlin are now entering the final 18 months of their Tokyo Olympic campaigns. Rising to the challenge, both swimmers have increased their training program and intensity in preparation.

Shayna who previously trained with Cate and Bronte Campbell under coach Simon Cusack has opted to remain in Brisbane with new coach Dean Boxall. Jack McLoughlin is based at Chandler with coach Vince Raleigh.

Whilst 'Jack and Jack' share a common Olympic goal, they have vastly different personalities. Shayna is extroverted and outgoing, whilst Jack prefers to let his swimming do the talking. Both are managed by Phil Stoneman at M5 Management who encourages them to chat about their life in and out of the pool, and what they can learn from each other.

Unsurprisingly the pair are preparing for vastly different careers outside of sport. Shayna is undertaking a Sports Management degree at Griffith University, whilst Jack is studying Civil Structural Engineering at Queensland University of Technology.

Here's what they have to say about each other:

JACK: "Shayna is an athlete on the move and the heir-apparent to the international speed queen crown. She is a positive, upbeat member of the Aussie swim team and great fun around the pool. But when it's race time, she switches into race mode with laser focus."

SHAYNA: "Jack is a no-nonsense quiet achiever who simply gets on with the job. He has a great work ethic and is known for his self-discipline including following his training program to the letter! I have very high hopes for him in Tokyo."

JACK MCLOUGHLIN BIO
EVENT: SWIMMING - 1500 FREESTYLE
HIGHEST ACHIEVEMENT: 1500M FREESTYLE COMMONWEALTH GAMES GOLD MEDALLIST
Jack McLoughlin began his swimming career as a middle-distance swimmer winning gold in the 4 x 200m freestyle at the 2013 Australian Youth Olympics. After transitioning to long distance swimming, Jack cemented his position as one of Australia's best endurance swimmers. Jack qualified for the 2016 Rio de Janeiro Olympic Games by dropping 24 seconds in the 1500m Freestyle and went on to finish 3rd in his heats and 9th overall. Two years on; Jack has won gold on a world stage securing gold in the 1500m and silver in the 400m freestyle at the 2018 Gold Coast Commonwealth Games.

2018 was a standout year for Shayna beginning with the Gold Coast Commonwealth Games. Shayna helped lead the Australian team to two gold medals in the 4x100 metre relay. Further to that she placed 4th in the individual 50m and 100m freestyle. Shayna topped off her brilliant year with another gold medal at the Pan Pacific Championships in the 4x100m freestyle relay.

Interests: her beloved dog 'Snoopy', and horse riding in the off-season
Instagram: @shayna_jack